In the Field with the Koret Shelter Medicine Team

The evolving role of a veterinarian who serves homeless animals

By sunrise, UC Davis alumna Dr. Cynthia Delany '00 has already cared for dozens of rescue animals in her converted workshop—administering medications, changing bandages, and mashing food for hungry puppies. She distributes buckets of hay to her draft horses and miniature donkeys before practicing a fast round of clicker training with a pair of camels she hopes to ride someday. At 6 a.m., when Delany pulls into her real job at Yolo County Animal Services, she’s just getting started.

More than one hundred homeless, sick, and injured animals receive a visit from Delany before 10 a.m. She’ll decide who is ready to move to the adoption floor, who needs a little extra love from the volunteer staff, who needs medical care or who may benefit from enrichment and training.

Next up is a check-in with Dr. Stacy Kraus, another member of the UC Davis Koret Shelter Medicine team overseeing UC Davis veterinary students spaying and neutering animals in a donated big rig reconfigured into a surgery facility. Delany downs a protein shake on her way to the surgery suite—no time for lunch today. Before she can get there, she runs into an animal control officer delivering a sick bat. She’ll have to tend to this tiny mammal later. Right now, a dog hit by a car and a feral cat with wounds are waiting for surgery, unlikely second chances for shelter animals just a few years ago.

When Delany took the helm at Yolo Animal Services as the head shelter veterinarian in 2011, only 48 percent of animals left the shelter alive. Today, 90 percent will.

As a shelter medicine clinician, Delany knows the more days an animal spends in their care the more it impacts the shelter’s tight budget. The faster she can move healthy animals through, the more funds she’ll have to save the ones that need extra care. Delany is one of many shelter veterinarians who also perform duties typical of a shelter manager, dividing her day between animal care and shelter operations. Indeed, the role of a shelter veterinarian has long been changing. Many of the nation’s best animal welfare organizations are led by veterinarians who now have a seat at the executive table.

By 7 p.m., Delany will return home to begin the second round of care on the tiny neonatal kittens that have been awaiting her return. Her own pack of rescued dogs pace eagerly nearby; it’s almost time for agility training. She’ll settle in for the night reading a book on animal behavior, her own cat curled on her lap.

“It’s how I recharge my batteries,” she smiles.

Originally published in the Fall 2016 issue of the CCAH Update 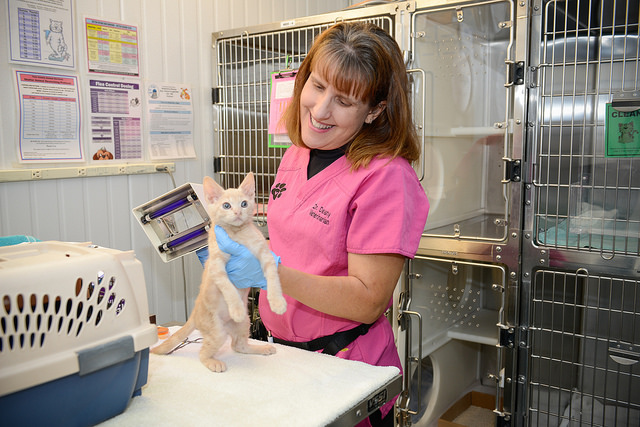